At the beach at Cape Canaveral, nineteen-year-old Josh Scurlock looks out at the water.  The larger than normal waves look rough but not too rough so he and a friend go out in them to play.  A strong swimmer – Josh loves the ocean and his new Florida home just five blocks from the beach. It’s Saturday and the sun is out and there is no school and nothing at all is wrong in the world.

Having recently moved to Florida from Indiana, he doesn’t notice – or even know how to notice – the rip current that will sweep him out to sea and away from his friend.  Once caught in its pull, his instincts are to head back in.  The land is where safe is and something is pulling him away from it so he fights. Swimming as hard as he can for as long as he can – with his friend on the beach now yelling for help – Josh Scurlock tires and drowns. And though a heroic surfer eventually makes it to him and brings him to shore – he cannot be revived.  Josh never sees twenty.

The U.S. Lifesaving Association says a story like that will happen over a hundred times this year on U.S. beaches.  My hope – and of that Josh’s mother, Dawn – is that they will be wrong.  By knowing what to look for, where to swim, and how to escape one should you get caught in a rip current, your summer will be a safer one. 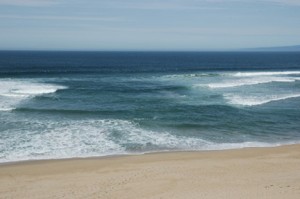 What is a rip current? Pictured to the left is a classic example: able to develop anywhere there are breaking waves, these swaths of current produced by water draining from the beach and back out to sea happen all the the time to lesser degrees without posing appreciable risk.

Often they move slow enough to barely be detected.  But given the right circumstances of waves and beach profile, they can develop into currents moving at speeds of up to 8 feet per second – faster than any of us can possibly swim. Ranging in size from just a few feet to hundreds of yards, their pull can be to just outside the breaking waves to over a hundred yards from shore.

How to spot a rip current: As with all risks, avoiding it altogether is safest.  Though not always visually detectable – stronger rip currents can give off some telltale signs.

Often, the best resource to help you avoid rip currents – not surprisingly – are the lifeguards.

Eight out of ten people rescued by beach lifeguards in the U.S. are rescued from rip currents.  Guards hate rips and know how to spot them.  Before going in, ask the nearest guard specifically about rip currents in the area and what the threat level is for rip currents. Also, please check the NOAA for Rip Current Threat advisories by clicking here.

If avoidance fails: If you are caught in a rip current the primary thing to so is to stay calm and relax.  You are not going to win a fight with the ocean.  Swim slowly and conservatively parallel to the shoreline or relax and let it carry you out past the breakers until it slacks.

Contrary to myth – rip currents are not “undertow,” a misleading term.  They will not pull you under the water.  So long as you can tread water or float you will be safe until you can escape the flow and head back.  When you head back in, do so at an angle to the shoreline.  Again, maintain a slow and relaxed pace until you reach the shore or assistance arrived.  If swimming at a guarded beach ─ and you should be ─ they will most likely have seen you and will be on their way out (or watching carefully).

[Experienced] surfers go out when it’s rough because it’s fun and they are tethered to huge boards that float.* (See note)  If you’re not VERY comfortable in rough water over your head – stay out of rough water totally.  You’re not ready.

I’d like to personally thank Dawn Armstrong for giving me permission to use the story of her son, Josh, to get your attention. Dawn is working hard to educate the public in her area of the country about the dangers of rip currents so that no one else will have a story like hers to tell.

* (Note:  Reader Nate L., an avid surfer, correctly schooled me up and pointed out that too many beginning surfers depend on their boards for floatation.  That’s a huge mistake.  Leashes break, surfer’s lose their boards, and then the weak swimmers among them are in just as much danger as anyone else.  Nate’s advice for surfers is “…if you can’t swim out and back from the break without a board, it’s too big for you to go out.”

Thanks Nate – that is a  VERY good point.

disclaimer: The views and opinions expressed by the author are not necessarily those of the Department of Homeland Security or the U.S. Coast Guard.