The Three People I Won’t Sail With

You don’t know my mother, but she is awesome. I could (and should) write a book about the wisdom she has passed to me over the course of my life.

Her lessons always contained a memorable phrase — often paraphrased from poetry — that helped the idea stick.

Never wrestle with a pig. You both get dirty and the pig likes it (George Bernard Shaw). This capped off her lessons on arguments and conflicts.

Opportunity isn’t going to knock on the door. It’s busy out there working (Mom’s version of Thomas Edison). She used this to get me off the couch as a teenager.

But it was her Ben Franklin that I saw in action most during search-and-rescue work: If you lie down with dogs, you get up with fleas.

Franklin and Mom were right. You are judged by the company you keep. At sea, the wrong people can ruin more than your reputation — they can literally ruin your life. After meeting a lot of folks at the end of very bad days on the water, there are three types of people I won’t go to sea with.

No one ever made me angry giving me a bottle of Scotch. I’m not against alcohol on boats, and in some cases I require it. For sure, no one should drink while operating a vessel, but I’ve been on enough safe and well-run boat-based wine and brewery tours to not appreciate the safe mixing of alcohol and water.

However, anyone with a recent history of drinking to excess is not worth the risk they bring aboard. 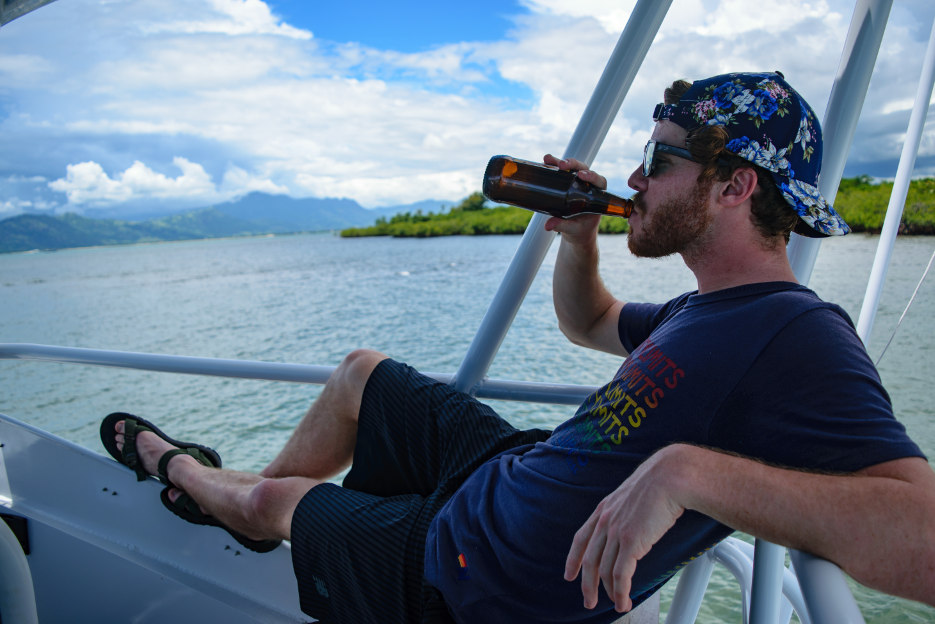 Putting aside the discomfort of watching your old frat buddy lose his lunch while you’re trying to eat yours, intoxicated passengers can hurt themselves and others — and they’re useless in an emergency. Boats at sea are unstable; you don’t need someone whose sea legs get worse with every mile. I’ve seen too many drunk passengers and captains create havoc for all on board to set foot on a boat with anyone who has a substance abuse problem.

My first boss as a rescue swimmer, Mike Odom, nearly lost his life while saving three guys who had no business crewing a sailboat. It’s fine to boat with a novice; every boater in the world has a first day at sea. But they have to know they are a novice. They have to understand and appreciate their limitations and be on board with who is in charge and who isn’t. And — write this down — there should always be at least a 2-to-1 ratio of experienced to novice boaters on any trip.

The clueless can be dangerous. They can divide your attention and require more looking after than those you have learned to trust and have developed experience with. The worst kind of novice — the ones I refuse to boat with — are beginners who are unwilling to admit they are beginners.

The ocean is no place for a rookie who is too proud or insecure to admit they are a rookie. They have to understand that the three times they drove their father’s Carolina Skiff won’t make them your first mate. The inability to admit their limited experience should make you think twice about taking them to sea. You might both learn a lesson the hard way.

I’m probably going to hurt some feelings here, but my guess is that what comes next will garner more agreement than disagreement.

Boaters who refer to themselves as “captain” scare me. I know, you worked hard to get your six-pack license. The test was difficult, and you only made up some of your sea time on your application. It’s believing that your title alone makes you able to handle yourself out there that’s dangerous. It doesn’t.

What makes me believe they are dangerous? Perhaps I’m biased because most “captains” I’ve met were whining at the end of a hoist cable after abandoning their boats. An overabundance of confidence — the opposite of being clueless — is what gives me the willies when I hear a boater tell me how experienced he is.

Humility is a hallmark of every captain I’ve ever felt safe around. Consider the words of Starbuck, the young chief mate of the Pequod in Herman Melville’s Moby-Dick:

“I will have no man in my boat who is not afraid of a whale.”

That quote hangs over my office door for a reason: A fearless man is a far more dangerous comrade than a coward.

So how do you judge this fearlessness in a boat operator you don’t know well? Ask them to tell you about a mistake they made that almost got them in real trouble at sea. If they can’t tell you one, they’re either a novice or a “captain.”

Be mindful of who you go to sea with, as well as those who are aboard boats you’re invited on.  There may be others, but these three types of people can definitely get you into trouble on the water.

Mom was right: Whom you hang out with does matter.

(This article first appeared in Soundings)